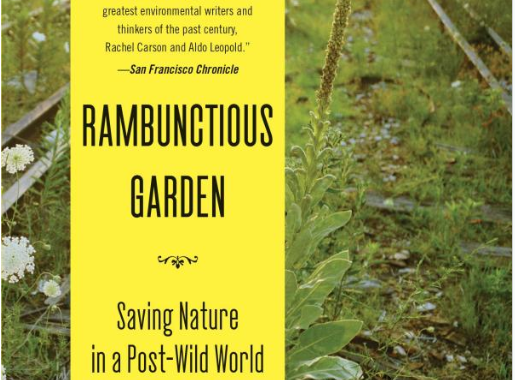 Rambunctious Garden is not a gardening book.  It’s more a book about the philosophy of conservation, written for a popular audience.  As such, it’s very thought-provoking and deep.

The book begins by tracing how our concept of nature in America developed.  We tend to define nature as separate from humans – as pristine, wild, untouched.  But as Marris points out, there is little (if any) nature that hasn’t been touched by humans, and trying to undo human influences (and guard against future incursions) is costly and, ultimately, futile.  Humans are also themselves part of nature – a species like other species, not a separate category of being.  So, the way that we think about nature and the ways that we’ve generally thought about the conservation of nature are flawed.  Marris contrasts the “conservation movement’s persistent focus on wilderness” in America with the traditional European approach, which has instead “focused on sustainable human use and avoiding extinction” (p. 18).

So, if Americans give up our way of thinking about nature (as pristine wilderness), what happens?  How does our view of nature and conservation change?  Marris provides several interesting examples of how we might think anew about preserving and supporting nature.  Basically, if we stop trying to halt time (by seeking to preserve pristine wildernesses perpetually in their “original” or “natural” state) and instead try to do something else (such as support the greatest biodiversity possible or slow the rate of extinctions), our approach to conservation changes too.  Rather than focus only on preserving pristine wildernesses, for example, we might engage in assisted migration of plants that are threatened by climate change, introducing species that might otherwise go extinct (as global temperatures rise) into new regions further north or at higher elevations.  Such assisted migration flies in the face of traditional ideas of conservation, because it isn’t about preserving pristine ecosystems in their “original” or “natural” state but about preserving individual species from extinction, even if preserving the species means disrupting pristine ecosystems by introducing an endangered new, foreign species into them.

So, what does all this philosophizing about new approaches to conservation have to do with wildlife gardening?  Well, basically, when we garden for wildlife, we are participating in these new approaches to conservation.  We are engaging in reconciliation ecology – “inventing, establishing and maintaining new habitats to conserve species diversity in places where people live, work, or play” (p. 145).  We are rewilding our back yard and assisting in the migration of species to new habitats.  We are part of a movement to transform lands that used to be thought of as unnatural and lost to conservation into lands that serve human needs but also preserve nature in the background:  “This background nature comes in different flavors, to be sure, from vast fields of genetically identical corn to city parks to the last hectares of South America’s Atlantic Forest, where tiny golden lion tamarins swing from the trees.  Not all this land is equally valuable to most conservation goals, but all of it can be improved.  Those cornfields can grow strips of native plants on their edges; those city parks can provide food for migrating butterflies.  Thus the project of conservation is not just defending what we have, but adding lands to our portfolio and deepening value of the lands in play” (p. 135).  Our back yards can be part of that project too.

Bringing Nature Home: One Backyard at a Time